THE ALUCARD CODE
by Marie Soffe, Irish visual artist and writer.
‘What is there under your wallpaper?’ (Perec, 2008, p.211) 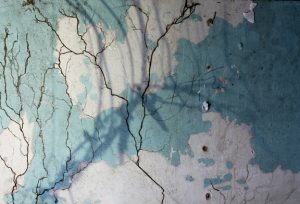 On the day I first visited Bram Stoker’s birthplace in Marino, a beautiful butterfly had become trapped at windowsill level in the upper room, fluttering its vividly hued wings in an attempt to escape to the sunshine outside. With a little help it regained its freedom, forming a strangely appropriate counterpoint in a house that labours under the weight of a Gothic horror story.

As the butterfly is traditionally the symbol of the soul set free after death, and also embodies the process of metamorphosis, I was encouraged by this colourful and light little creature making its own intervention in space that must stay forever in the grip of its association with the mythical and terrifying Count Dracula.

The house in which Dracula’s creator, Bram Stoker, spent the earliest years of his life holds a peculiar fascination for a broad range of people including historians, Gothic academics, literary experts and artists. Part of an elegant Georgian terrace, it has been the dwelling place of several families in its over two hundred year history, including that of Irish republican politician, Harry Boland, but interest is focused on Dracula, recognised worldwide as the ultimate vampire novel from which all other manifestations draw their inspiration. Now in new private ownership, the house has been divested of almost all its non-original contents, stripped back to a dry and pockmarked skeleton that awaits revival. Public and state interest in the house are such that, whilst it is privately owned, in theory and practice it could be considered a ‘public’ space.

In her book Art and Architecture: A Place Between, Jane Rendell argues that ‘…public art should be engaged in the production of restless objects and spaces, ones that provoke us, that refuse to give up their meanings easily’ (Rendell, 2008, p.xiii). In a house subject to dominant ideologies about the preservation of historic buildings and overshadowed by the dark spectre of Dracula, how does an artist intervene here in order to create a provocative space? Of necessity, they must tread a precarious line between the concerns of their practice and the weight of history, conditions with which all ‘site-specific’ art occurring outside the gallery space must contend.

Artists Vera McEvoy and Frances Nolan’s stated intention for their collaborative intervention is to create ‘a rupture in time’. What does this mean? Rupture is a violent word, suggesting the tearing apart or breaking of something, and it is impossible to so interfere with time. It could be argued, however, that a rupture has already happened, given that the building is a structure in limbo, paused in a complicated in-between state, between what it has been and what it is to become, where what it is to become must resemble as closely as possible what it originally was. The impossibility of this task, of scraping back the building to its essence through the erasure of two centuries of human habitation, is visible in the layered palimpsest that has been revealed by the renovators. This recalls Jane Rendell’s suggestion that the findings of archeological digs operate as ‘metaphors for psychoanalysis in which the gradual wearing away of conscious material reveals the unconscious still intact.’ (Rendell, 2008, p.124) 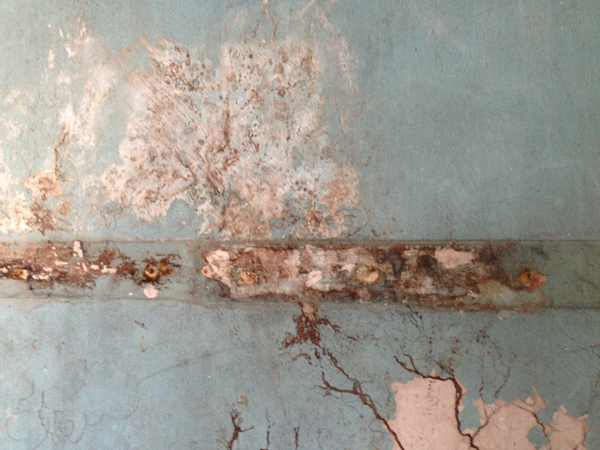 In this instance, the walls, stripped of layers of wallpaper, reveal a magnificent but wounded patina, a softly-hued amalgamation of colour and texture reminiscent of antique maps, delicately tinted in watery shades of blue, pink, green and cream. These colours have seeped into the chalky plaster through previous applications of paint, or dye absorbed from patterned wallpaper, leaving behind fragments of designs embedded in the surface. Scraps of wood inserted into floorboards, plus residues from fireplaces and fitted fixtures, all utter evidence of human intervention, while in two rooms a previous decorator with an eye to history has daubed ‘1986’ in white emulsion onto the wall and floorboards, thus securing his anonymous place in the layered story of this building. However, while the building reeks of the absence of these former inhabitants and workers, its current pared-back state provides what Rendell calls ‘a space for the viewer to remember and imagine.’ (Rendell, 2008, p.91)

A low-roofed extension to the back of the house remains an incongruous addition to the tall and elegant structure, its contents now ripped out save a modern toilet and sink, the bare walls a mass of cracks and dark, oxidised veins creeping outwards. Above, dense veils of spider webs hang from the roof beams, their thick and dusty folds holding remnants of insects and leggy arachnids. It is not a room in which one wants to linger. McEvoy and Nolan have filmed a section of the ruptured walls and overlaid it with ghostly shadows cast by letters constructed from materials found within the house; these letters refer to ‘weird sisters’, that is the three female vampires that almost succeed in seducing the solicitor’s clerk, Jonathan Harker, in Count Dracula’s castle. A layer of Pitman shorthand appears outline by outline across the veinous but strangely beautiful background, as if an invisible hand were recording the terrible story, too horrible to be clearly told. Projected onto a bedroom wall, the coded ciphers appear and disappear, echoing the idea of presence and absence which is at the heart of the artists’ intention.

Much of the novel Dracula is supposedly typed up by Harker’s fiancé, Mina, from his journal written in shorthand, one of the most modern technologies of the time. Price and Thurschwell state that ‘Moviegoers may remember Dracula for its blood and sex, but it is also a novel about typewriters and shorthand.’ (Price, L. and Thurschwell, P., 2005, p.7). In tandem with the projection above, the artists have deconstructed Chapter 3 from Dracula by transcribing it back into shorthand, displayed in a ribbon of hieroglyphs that suggest a type of ancient frieze around the walls. The carnal and fleshy content of this chapter, in which the mouth, tongue and teeth of a female vampire are described in graphic and erotic detail, thus permeates the house, its sensuality punctured into the skin of the walls. Dracula refers to his castle using the term ‘we’, as if he and it were one and the same. By drawing from this particular chapter, the artists have ensured that the myth of Dracula, the history of his people and his land, the physicality of his castle, Harker’s imaginings of its former inhabitants, plus his growing terror within its walls, are forever transfused into the capillaries of this house. They achieve this by using an ephemeral and illegible code that will disintegrate into invisibility when the exhibition is over, thus marking what Rendell has called ‘the moment at which what is now becomes what has been’. (Rendell, 2008, p.98)

Despite their utilisation of text from the novel, the artists insist that their intervention into this house is not about Dracula per se. Rather, it raises questions about the psychological space of this house, the ordinary and extraordinary memories it holds silently within itself, and the imaginary events that we, as visitors, project into the space. It questions how a building becomes imbued with nostalgic or other qualities according to who lived in it. In particular, Stoker’s writing of Dracula inevitably raises questions about inspiration and one can’t help but wonder what occupied his mind during the first seven years of his life when he was confined to bed in this house with a mysterious illness. Were his long days spent in possibly the warmest room in the house, the basement, or up in the cold but bright attic room? In The Poetics of Space, Gaston Bachelard writes that ‘Up near the roof all our thoughts are clear’, whereas the cellar is ‘the dark entity of the house, the one that partakes of subterranean forces.’ When we dream there, he claims, ‘we are in harmony with the irrationality of the depths.’ (Bachelard, 1994, p.18)

Wherever Stoker spent his days, it is a privilege to be able to explore a space that cradled and nourished an author whose novel raises so many questions of its own, questions that are increasingly relevant today, about technology, obsolescence, consumption, gender roles, sexuality, and work, amongst others. McEvoy and Nolan have combined their diverse practices and skills in a truly collaborative intervention that honours the significance of this house and yet leaves us with more questions than answers about what really lies under the wallpaper.